Get nylon webbing wet and what does it do? Shrink. Does this matter? It depends on your Coast Guard inspector.

Years ago we used to service inflatable life rafts. For quite some time a US Coast Guard inspector would spend all day at our shop overseeing what we were doing. Generally they knew what we were supposed to do and stayed out of the way unless they saw something questionable (either with the raft or our work).

Seattle was a training port so there were times we would get untrained inspectors. Either they used their time to learn or once in a while we would get someone who wanted to make our life difficult. One day we had one of the latter classification and he checked the rafts out we were working on, regulations in one hand, tape measure in the other. He came across an older raft that had been stowed in a very wet place on the vessel. The inspector went around the raft measuring the distance from the exterior grab line to the floor. When new there is a specification for this distance but on this raft the grab lines were too far off the floor. 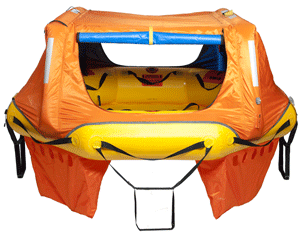 The image above shows the black webbing grab lines and how they are supposed to hang down.

The inspector told us that he would not certify the raft until we had moved all the grab lines down so that the distance would comply with the regulations. He did not understand that nylon webbing shrinks when it gets wet, and this raft had been really wet. Also missing from his understanding was the specification was a manufacturing spec, not one for a raft that had been in service. Still he would not accept our reasoning and once again informed us that we must rectify the situation.

Several phone calls later the head of inspections in Washington, D.C. set the new inspector straight. He signed off the raft and we never saw him again.

So if you are designing a strap where the length is critical, consider the environment it will be working in. If you are using nylon webbing and it is going to get wet, allow for shrinkage.